Skolar’s visual language was created with a consideration for specific styling and modulation principles of the Indian scripts. Designer David Březina investigated historical and modern Gujarati letterforms as well as printing history to guarantee that Skolar Gujarati brings the same fusion of robust typographic savvy with a twist of individuality readers have come to expect from Skolar PE, but in a design built for Indian typography first. The letters and proportions are rooted in traditional Gujarati type, but offer a vitality and panache all their own, whether used on screen or in print, for editorial, scientific, or scholarly treatments.

With an expansive complement of conjuncts, half-forms, and contextual variations for matras and other marks, the family can handle novel combinations, transliterated words, and unexpected combinations without a hitch. Linguistic alternate forms and a full retinue of punctuation and figures (in both Gujarati and Latin) across the weight range furnish the typographer with the tools to address the most rigorous scholarly treatise or editorial message in any combination of languages. 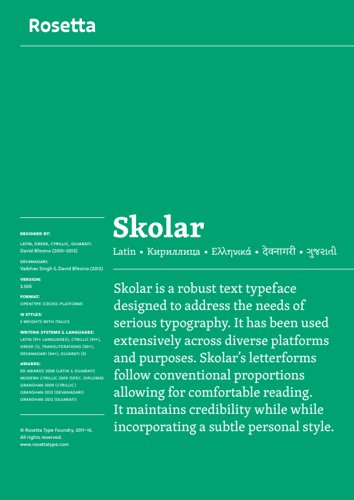 David Březina Design and production
David Březina is the managing director at Rosetta. While you may know him as the designer of the award-winning type family Skolar, he has also worked on custom typefaces for Adobe, Linotype (Monotype), Microsoft, Google, and others. So far, he has designed typefaces for Cyrillic, Greek, Gujarati, Devanagari, and various extensions of Latin. David holds a Master’s degree in computer science from Masaryk University in Brno (Czechia) and an MA in Typeface Design and PhD from the University of Reading (UK). His cross-disciplinary PhD thesis studied visual similarity and coherence of characters in typefaces for continuous reading in Latin, Cyrillic, and Devanagari scripts. He has also been actively involved in writing, presenting, and conducting workshops on type and typography around the world.