Avory is a gently condensed sans that challenges convention. It wears expressive details like a low optical center, wide horizontal crossbars, and lettering-inspired touches to the diagonals and terminals. Tall, with broad shoulders, it is easily spotted from afar. Avory was inspired by the lettering work of Czech designer Jaroslav Benda, a lesser known treasure of mid-century graphic design. An array of alternate forms offer variation in descenders and a choice between open and closed counters, akin to the fluidity of lettering. Diacritics that are exuberant, not hesitant, and experimental contextual alternates keyed in for Czech and Slovak letter combinations complete the effect. Avory is a full-fledged typographic power tool: nine weights, complete with italics, small caps, a wide range of symbols, and support for Greek and Cyrillic scripts included. 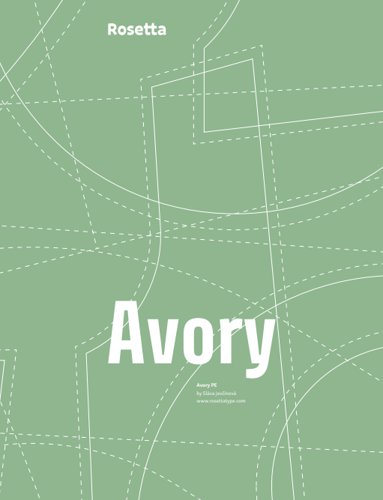 Sláva Jevčinová Design
Sláva Jevčinová is a type and graphic designer from Slovakia. She holds an MA in type design from the Type and Media programme at The Royal Academy of Art in The Hague as well as an MA in graphic design from J. E. Purkyně University in Czech Republic. After an internship at Mota Italic in Berlin she specialised in TrueType hinting at Fontwerk. She has been working independently since 2013 and regularly collaborates with Rosetta as hinting specialist and type designer.