Aisha Latin is a fun, individualistic typeface that strides the line between text and display typography. Designed as a counterpart to Aisha Arabic, it is inspired by the free, dynamic curves of brush-pen calligraphy in the Maghreb, imparting a joyful energy to texts whether set alongside Arabic or standing on its own.

The Latin version of Aisha is one of the designs where the style of the Arabic version shaped the direction for the Roman letters, rather than the other way around. Designer Titus Nemeth started with Arabic foundry type cut in Algeria in the 19th century, and expanded it into a full, modern type family. He then developed the Latin face to accompany the Arabic, drawing on the playfulness of Maghribi lettering traditions.

Aisha Latin is exuberant and dynamic, peppered with small, offbeat details in the letterforms that set it apart from less lively counterparts, and equipped with an array of contextual alternate forms and stylistic sets that typographers can employ to tune the type to their message. The smart features, full assortment of figures, and ornaments ensure that Aisha will deliver its lush and funky personality for any display or long-form text usage. 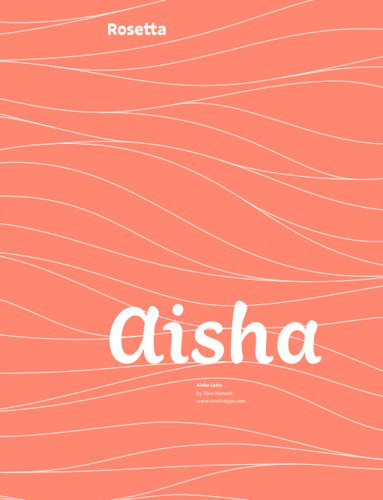